To estimate the current and projected (2019 and 2020–2060, respectively) economic impacts associated with overweight and obesity we used a cost-of-illness methodology. The model includes 28 obesity-related diseases that were indicated to have evidence of high BMI risk-linkages in the Global Burden of Disease Study. The methodology was developed to be replicable across countries and to produce comparable and easily interpretable results. This methodology was piloted in eight geographically spread countries with a range of income levels. 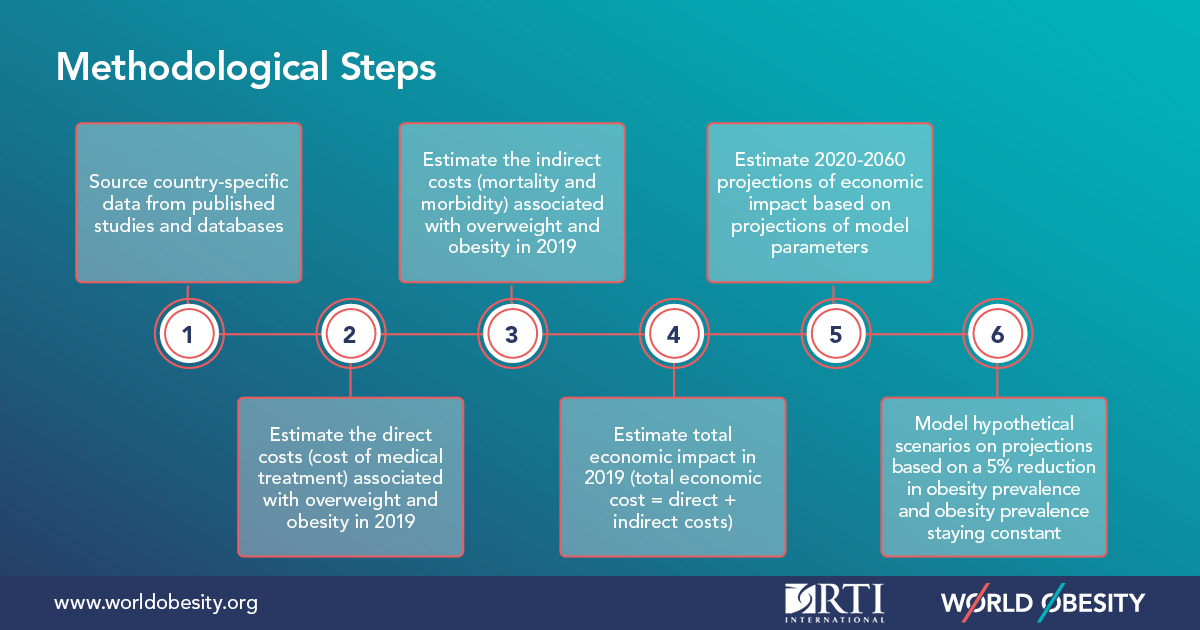 For more detailed information on the methodology, see the published article in BMJ Global Health.

Informed by a team of experts

This project is being informed by an independent scientific committee. This group has an advisory and oversight function, supporting methodology development and informing the research. All members are respected leaders in the field of obesity.

In an effort to reduce premature mortality from these diseases, Dr Nugent will coordinate capabilities including health economics and evaluation; communication and behavior change; epidemiology and survey research; establishment of disease and risk factor registries; and development of guidelines, care pathways, and medical technology applications for global NCDs.

Professor Sassi's research focuses on economic analysis of health services, the economics of chronic disease prevention and measuring inequalities in access to healthcare. He is Principal Investigator and Project Coordinator on the European Commission funded Horizon 2020 project Science & Technology in childhood Obesity Policy (STOP). He is the lead author of Obesity and the Economics of Prevention: Fit not Fat (OECD and Edward Elgar, 2010), editor and author of Tackling Harmful Use: Economics and public health policy (OECD, 2015) and Promoting Health, preventing disease: The economic case (OUP, 2015); and author of a large number of publications on the economics of chronic disease prevention. He was awarded a 2000–2001 Commonwealth Fund Harkness Fellowship in Health Care Policy.

In 2006 Time magazine listed Kelly Brownell among “The World’s 100 Most Influential People” in its special Time 100 issue featuring those “.. whose power, talent or moral example is transforming the world.” Brownell was elected to membership in the National Academy of Medicine (formerly the Institute of Medicine) in 2006 and has received numerous awards and honors for his work, including the Lifetime Achievement Award from the American Psychological Association, Graduate Mentoring Award from Yale, the James McKeen Cattell Award from the New York Academy of Sciences, the Distinguished Alumni Award from Purdue University, the Lifetime Achievement Award from Rutgers University, and the Distinguished Scientific Award for the Applications of Psychology from the American Psychological Association.

Dr Brownell has published 15 books and more than 350 scientific articles and chapters. He has served as President of several national organizations, including the Society of Behavioral Medicine, Association for the Advancement of Behavior Therapy, and the Division of Health Psychology of the American Psychological Association.

Tim Lobstein is a visiting professor at the University of Sydney, NSW, and at the Public Health Advocacy Institute of Western Australia. He has recently retired as Director of Policy for the World Obesity Federation based in London and continues as consultant to the organisation, as well as to UNICEF and various other authorities and non-governmental organisations.

Dr Lobstein has extensive experience in data and policy analysis, policy dissemination, evidence reviews and knowledge transfer and has been principal investigator in EU-funded projects on marketing food and beverages to children, and has been a work-package Leader in eight EU-funded consortia projects related to nutrition, the prevention and management of obesity, and health impact assessment. Dr Lobstein is a founding member of the INFORMAS research consortium, and a commissioner on the Lancet Commission on the Global Syndemic of Obesity, Undernutrition and Climate Change.

Meera Shekar is Global Lead for nutrition with the World Bank’s Health, Nutrition and Population Global Practice and Program Manager for the Power of Nutrition TF at the World Bank. Meera has a PhD in international nutrition, epidemiology and population studies from Cornell University and is a Commissioner on the Lancet Commission on Obesity co-led by the University of Auckland & GW University. Over the last several years, she has led the repositioning of the nutrition agenda that led to the new global Scaling-up Nutrition (SUN) initiative, and was a key thought leader on the Catalytic Financing Facility for Nutrition that evolved in to the Power of Nutrition.

Meera serves as the chair for the SUN executive committee and has been one of the principals for the emerging aid-architecture for the SUN, and the G8 and G20 agenda-setting process for food security and nutrition over the last several years. She leads the global and country-level costing and financing analyses at the World Bank, and the first ever global Investment Framework for Nutrition and author of the World Bank’s fist analytics on the Health and Economic consequences of obesity. She has also worked on the demographic dividend and population and development issues.

Dr. Juan Rivera is the General Director of the National Institute of Public Health (INSP) in México. He has been General Director since 2017 and was the founding Director of the Center for Nutrition and Health at INSP. He is a Professor of Nutrition at INSP and at the RSPH at Emory University, a Distinguished Fellow at the George Institute for Global Health, a member of the National Academy of Medicine, the Mexican Academy of Sciences, the IANPHI Executive Board and the EAT-LANCET Commission.

He has authored over 540 publications about the epidemiology of malnutrition in all its forms, the dietary intake of the population, the health and environmental effects of our food system, the determinants of nutrition and health in the first 1000 days, the effect of micronutrient supplementation on nutrition outcomes and the design of programs and policies for the prevention of undernutrition and obesity. His research has been used as the scientific basis for the design or modification of large-scale programs and policies in Mexico aimed at the prevention of undernutrition and obesity, such as the CCT PROSPERA, the taxation of sugar-sweetened beverages and other food environment regulations. He has participated in the evaluation of several nutrition programs and policies in Mexico.

At present he is a Member of Scientific Research Commission, National Institute of Health Research & Development (NIHRD), Member of the Indonesian Technical Advisory Group on Immunization (ITAGI), member of WHO Reference Group on Health Statistics and Expert Member of the National Task-Force for the Control of COVID-19.

Alice Ojwang holds a PhD in Dietetics from the Centre of Excellence for Nutrition, North-West University, South Africa. She has more than 20 years of experience working in Nutrition and Dietetics, specifically in preventing and managing obesity and related risk factors. She has been instrumental in shaping the direction of the Dietetics profession in Kenya. She works as a Practitioner, Health Promoter, Researcher and Mentor.

With a Doctoral degree in dietetics, her areas of focus include dietetic related research and health education/promotion in obesity and metabolic syndrome, diet and its influence on women’s economic empowerment, behaviour change interventions, the economic burden of obesity and its related risk factors, the impact of diet on health as well as prevention and management of chronic conditions. She continues to mentor young nutrition/dietetic professionals in Africa and share herself to grow professionally with her peers. Alice serves as a lifestyle activist to prevent chronic diseases and improve quality of life by creating awareness of diet and health. She is a lecturer at the Department of Human Nutrition and Dietetics at the Technical University of Kenya, Nairobi-Kenya.

RTI and World Obesity will be expanding this methodology to most of the remaining countries in the world. It is anticipated that these findings will be published in an academic manuscript and on the Global Obesity Observatory in 2022.

Additionally, this economic impacts of overweight and obesity model is being modified to include COVID-19 outcomes attributable to obesity. This model - which will only be run on the 8 pilot countries - estimate the additional economic impact of obesity-attributable COVID-19 outcomes. This will be done by re-running the model with estimates of the the excess number of COVID-19 hospitalisations, intensive care unit (ICU) admissions, and deaths by body mass index (BMI) category and other affected parameters, such as wages and GDP.

This project is funded by an unrestricted grant from Novo Nordisk.

World Obesity and RTI International have put several safeguards in place to maintain transparency, reproducibility, and iterative critical review of the research process for this project.

A ‘Conflict of Interest’ statement has been completed for this project which is available here.

Are you finding the information on these pages useful?
Yes
No
N/A

Thank you for feeding back to World Obesity.

If you have any further feedback or suggestions please email us at obesity@worldobesity.org.